The Politicization of Christianity.

Growing up in a strict but loving Christian family, we were taught that the Christian faith is all about Jesus Christ. Godly values such as loving our neighbors, sharing what we have with those that don’t have and forgiving those who “sin” against us modeled our psyche and d lifestyle. As I grew older and moved up from Sunday school to the “main church”, after my confirmation, those godly home and Sunday school values began to be challenged by passionate religious preachers and evangelists. We were taught and enforced to practice and implement the provisions of our church constitution irrespective of its devastation on the people our words and actions impact or to the Christian faith. So I became one of the Christians, raised in an Orthodox church, to respect only our church doctrines as enshrined in the “Constitution of our church”, one of which is condemning Pentecostal churches and their style of prayer and speaking in tongues.

When I became older and started a relationship with God, I joined the youth fellowship. Full of zeal, I wasted no time in pitching my tent with “vibrant radical for Christs youths” fighting the elders of the church and rebelling against all church authorities who stop us from conducting deliverance service on members who we suspect are possessed or who personally confess that they are possessed. Having people fall under the anointing was the “in thing”.  It made us feel powerful and legit. We fought church pastors or elders who say we cannot hold all night prayers or stop us from taking the church’s equipment out for open air crusade to win more souls for Christ. Are you kidding me?! How dare someone stop the work of God!  For that we, we labeled them “Pharisees and Sadducees”. If in transit we made sure any bus we boarded will not know peace until we sing and preach the word of God. Out of zeal and burning desire to do exploits, we abandoned our church weekly activities because it was too lukewarm for us and began to attend every crusade organized by “big” Pentecostal pastors and churches in Lagos, Nigeria. It was all about fire!!!! Books and cassettes of western minsters were the in thing then too. The western church was the model. To us, America was where true Christianity, as Jesus said it should be, existed. All the big western preachers had to say to us was jump and we will simply ask how high they want us to.

Many years later, I found myself as Pentecostal preacher risking my life in dangerous parts of the country but still carrying on with this trend of ministering the word of God with attack on anybody who does not subscribe to the doctrine of the church I was working for or some parts of the bible I worship and adore.

But then, when I went back to Bible School something changed in me. I found out that our zeal to represent or present Jesus was making us treat people in ways Jesus does not approve. The zeal to see people saved, delivered and brought to the saving knowledge of Jesus Christ has sent the instructions of Jesus Christ to us Christians to the background.

In the meantime, living in the western world has brought about a new experience. It seems as if the directives of Jesus Christ to us Christians, as recorded in the Gospels, are less central to our thinking and behavior in the western world.  This is because there has been a disturbing trend by the do-it-yourself version of western religious traditions that is redefining Christian theology to authorize the victimization or intimidation of anyone who doesn’t fall in line with their version of Christianity. Political concerns have given birth to political Christianese among Christians and narrowed down God as an object of political pawn. Christian media houses and ministers ignore cases of racism and unashamedly support deceitful reporting of “Christian restoration and evangelism”.

Our devotion to this version of Christianity betrays the palpable truth that our acts goes against everything Jesus Christ commanded or modeled.  Today, we stop at nothing to limit or remove rights from those who don’t meet the “conservative” idea of an ideal Christian.

We choose “truth” we want to defend and, as a consequence, our beliefs in scripture dictates one thing, but our words and action opposes the very values that supposedly defines our faith. For example, we invoke our “Christian values” in supporting policies that will “defend” the unborn children. (For the records, I am not pro-abortion) but could care less if benefits, food and shelter is taken away from children currently alive. Per Titus 2:14 Jesus “gave Himself for us to redeem us from all wickedness and to purify for himself a people that are his very own, eager to do what is good”.

Acts 10:38 Says “God anointed Jesus of Nazareth with the Holy Spirit and with power, who went about doing good and healing all who were oppressed by the devil, for God was with Him”. The purpose of Holy Spirit and power which is a strong part of the Christian faith is supposed to help us to “do good” and help the oppressed instead of joining in oppressing them.

It is pretty hard to come to a factual conclusion for people who are ignorant of or chose to ignore history. As a Christian, I believe in the Christian faith. I am also aware that it is the most persecuted religion in the world. Be that as it may, there is need for us to be careful with our zeal to Christianize the twenty first century so we do not take the Christian faith back to the age of the Inquisition. 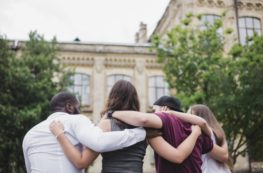 Between Cultural, Political and Biblical Values.

The Impact Of Politics on Christianity

@USMAN84kg Wish a rematch will be arranged so you burst his lips bro. Him go know say una no be mate. Mumu white trash like am.